Any civilization is evitably strangled in a process where it starts with exploring into the wild land, then settling, developing to its most high, and eventually fallen by the warfare or other misfortune. I am deeply curious about such process and try to simulate it. For simplicity, there are only three types of events in Flatdom, exploration, development and war.

Flatdom is a 2-dimensional world. The world consists of many grids. Every grids can either be a settlement for the Flatone, the Flatdom people; or a wild land, waiting for our brave explorer. Flatone will keep exploring the neighboring grids and developing the existing settlement. There are many factions among Flatdom people and they wage war to fight for the grid.

What happened in the Flatdom?

Every grid has a power index. It indicates the development scale of a settlement or the difficulty to explore and settle a wild land.

There are three types of events that can happen to a grid,

A grid can only happen one type of event per iteration. During the simulation, which event occurs depends on the power index of this grid and its neighbors.

The following screenshot demonstrates how different factions progress in a 8x8 Flatdom. Initially we have two factions with very little number of settlements. 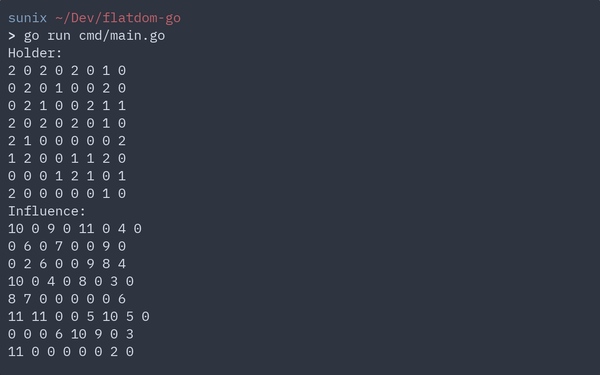 After few iterations, we can see,